Hello One and All!

Here's a nice clean version of the new, NEW YORK TIMES BEST-SELLING ANTHOLOGY "Age of Darkness" from BL Publishing, showing a slightly evil Horus grinding an Imperial Fist Marine into the dirt (a certain Christian Dunn's idea - so BLAME HIM!): 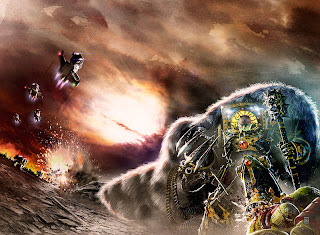 (Above)
Horus is *starting* to go all evil,
so he's not TOTALLY spiked up yet...
As is usual, I started off with draughting out thumbnails - just two thumbnail ideas this time, as I had a pretty set idea as to how I wanted this cover to look. Luckily, Black Library were happy with them and chose the first thumbnail to work from. Then it was simply a case of paint, Paint, PAINT! 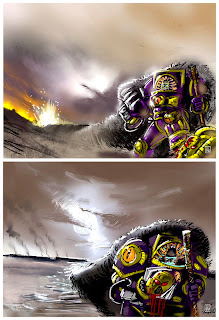 (Above)
The initial thumbnails,
BL correctly stated I'd made
his armour too purple -
n00b mistake ;) 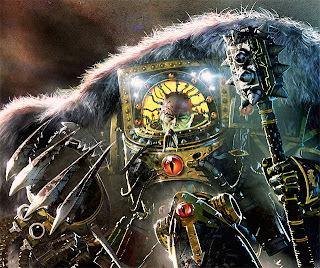 (Above)
Horus Detail, armour heavily based
on the classic Adrian Smith
Horus vs Emperor art. 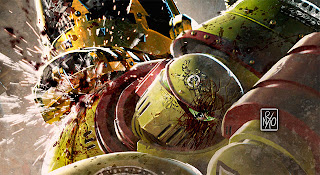 (Above)
OOF! BOOT TO THE HEAD!
See his panicked eye behind his eye-lens -
that's me, that is ;)
Cool, so that's the skinny on the new Heresy cover - I'm off to finish putting some more spikes on this here certain xenos cover I'm currently working on...
Posted by Neil Roberts at 01:42

Boom ! Well done Neil me old fruit. I love the watercolour influence in the sky.
You have achieved tons of POP too!

Amazing work! Do you utilize any 3D in your paintings?