Well that was fun! 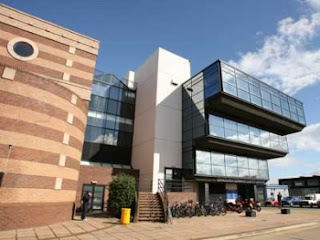 After a couple of hours in the car early Sunday morning, I arrived to set up at Glyndwr University in Wrexham - sitting next to the ever-pleasant Staz Johnson and Neil Edwards.

Also attending were the likes of Danny John-Jules and Dirk Benedict, cool.

Highlights were doing a sketch for the BEST Star Trek: TNG lookalikes I have EVER seen - wish I'd had a chance to get my photo taken with them - next time...

Coolest of all was meeting Marc Silk, the voice talent behind Stingo, Slugsy and a whole host of other cartoon voices. That's sure to get me some serious brownie points from my children. Sorted.

I spent the day signing and sketching - drawing mostly space marines at this event, there were loads of GW/ BL fans attending, those Horus Heresy books have a powerful hold over everyone who reads them. 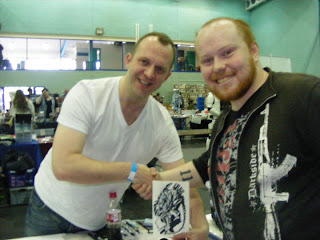 (Above)
Kenny and his 'Marine vs Aliens' sketch.
(Photo courtesy Kim Randles Facebook)
After a pleasant and uneventful drive back, I arrived home and had a lovely cup of tea. Job done.

Next posts: limited edition books, Eldar and being a magazine cover star!
Posted by Neil Roberts at 01:33

Neil, it was an absolute pleasure watching you work, yesterday. I think my favourite sketch was probably that Genestealer - ooh, no! The female marine (?) you drew for that woman near the start of the day. Top. Notch.

Neil, was great to finally meet you and bring you to our show!

Next one is September 19th - let me know if your available and let's lock it down :)

Glad you got home safely and enjoyed the day!