Well, it's been a while so I thought I'd belatedly post up my experiences at the recent Hi-Ex Comic convention in Inverness. 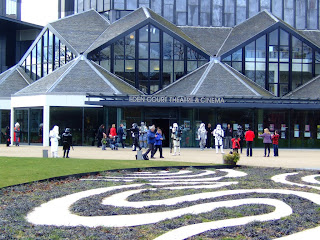 (Above)
Outside Eden Court, the 501st Garrison check for droids.
(Pic courtesy Joe Gordons' Flickr)
First up, I want to say a big thankyou to Rich and Vicky and all the organisers who made the event so much fun.

After a solid two day drive, stopping off at Stirling at a fantastic B&B, we made it to our holiday cottage 20 miles outside of Inverness - literally in the middle of nowhere, fantastic. Just like the But an' Ben in The Broons.

The opening Saturday of the event was slightly nervewracking, sitting at the artists table alongside the likes of Colin McNeil, Charlie Adlard and Simon Fraser. 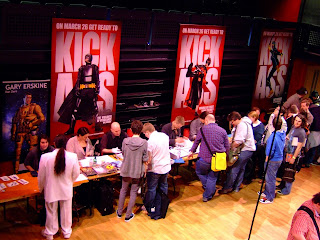 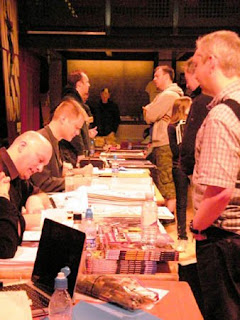 (Above)
Artists hard at work sketching for charity,
whilst I stand up and look like I'm about to pick a fight.
I was in fact having a nice chat about the nature of freelancing.
(Pic courtesy of the Hi-Ex Gallery)
I spent the next two days sketching constantly, with all the proceeds going to the chosen charity, Children 1st. I believe the total raised so far is in the region of £2000 - so well done all.

What was particularly nice and a definite strength of the show was the broad remit it had, it covered comics, gaming and childrens books - and the crowd reflected that. I drew plenty of pictures for some lovely wee boys and girls, one cheeky chappy didn't have any pennies left for a picture of Darth Vader I did for him on the Saturday only to return, briefly, on the Sunday and thrust a shiny 10p in my hand. Gawd bless ye, ye wee scamp. 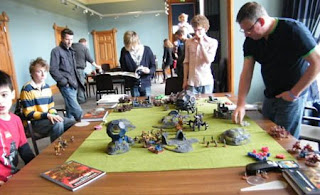 (Above)
The Games room, friendly people getting everybody involved in the hobby.
Run by the great chaps at Kingdom of Adventure.
(Pic courtesy of the Hi-Ex Gallery)
There were other moments that I'll merely list otherwise this'll turn into a mega-post that nobody will read:
And generally, meeting other artists, writers and publishers was fantastic experience and I'm sure I'll see them again at the many other Con's this coming year. 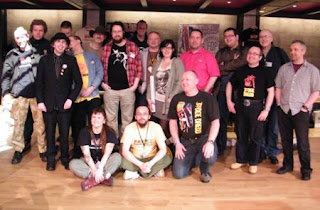 (Above)
2000AD creators and fans - great people all of them.
I am there, at the back, in the shadows -
look carefully, you'll see me.
(Pic courtesy of the Hi-Ex Gallery)
Right. After that, my family and I spent a lovely few days exploring Loch Ness (sadly, no monster) and surrounding area, only to get snowed in for a few days whilst the Highlands experienced freak blizzards. Mind you, I got to make a great big snowman with my kids. Ace.

(Above)
Beautiful Loch Ness on the drive from Inverness to the cottage. 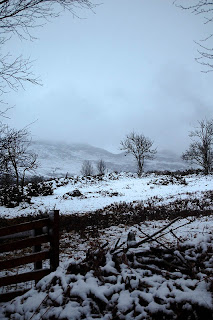 (Above)
Blizzards, snow, grey clouds. The roads were shut.
It was very much like the Shining.
"All work and no play..."
On the journey home we spent a whopping 15 hour drive back home, stopping off at the Deep Sea World to break the journey up.

All in all, we had a fantastic time - best of luck with future events!

looks like you had a fine old time mate. Hope to see you soon. We should sort out a date for a get together. You are welcome to come and stay at ours any time you like, kids and all!

It was great to finally meet you and say thanks for all the covers you've sent.

My Dredd 'sketch' is beautiful too, I'll never tire of looking at it!