So Black Library Live! 2010 has been and gone - and what a great day it was for me and hopefully all those good people who queued patiently and were polite and passionate about the work Black Library produces. 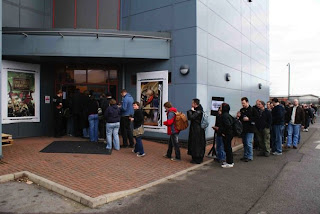 (Above)
The polite mob, queuing in typical British fashion - good work, everyone!
Image courtesy the Black Library Facebook page.
Some of the the images are from my twitter feed: @SkinnyElbows, where I intermittently 'tweeted' during the course of the day: 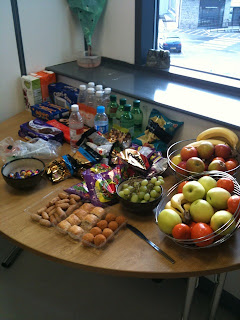 (Above)
Black Library's lovely hospitality.
Next year it's got to be a bowl of M&M's
with all the blue ones taken out ;)
The main hall had games themed around the different novels, with the Prospero table being a personal highlight. They'd even sculpted Leman Russ and Magnus in the image of the upcoming Prospero books - I'll get some pics of them up ASAP. 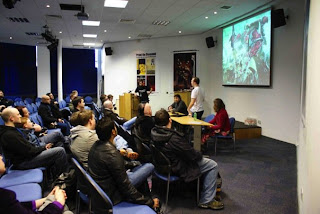 (Above)
The "Art of Black Library" Q&A session.
A life in stand-up comedy awaits. Or not.
Image courtesy the Black Library Facebook page.

Also that morning: Darius Hinks, Lindsey Priestley, Jon Sullivan and I had a Q&A session where everyone seemed to have great and pertinent questions, even if I didn't have a great answer! It was a good chance for people to get to know what it takes to make a cover and how much time and effort goes into it. Thanks to all those who attended, you made Jon and I feel very appreciated. 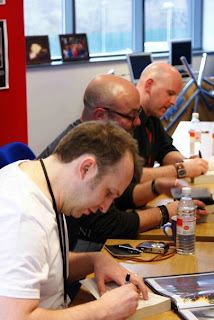 (Above)
The signing in full flow!
Image courtesy the Black Library Facebook page.
After lunch it was the big signing with Dan and Graham, where we were signing solidly until the end of the day. I gave out a few sketches which seemed to go down well and most seemed interested in my BL portfolio I had on show - especially the new "Nemesis" and "First Heretic" pieces. 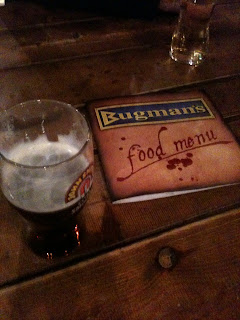 (Above)
A pint and the intense temptation of food...
After all that we headed over to Bugmans for a drink, debrief and general natter about stuff and nonsense. Then, slowly, we drifted off one by one as taxi's arrived, trains were to be caught and wives arrived to pick us up.

Oh, and we all had to leave by 6, 'cos they were testing the transformers or something.

A great day meeting the fantastic fans, authors, artists and staff of Black Library - here's to next year!

Those stonking great posters of Magnus and Russ in the Moot were awesome! Even if they revealed some surprisingly cute dedications on the bolters of the Emperor's Finest.
M

I can't understand a word of that. But it looks very impressive.

You look well old though.

'twas good to see you at BL Live! Mr. Roberts. Just wish I could have had more time to speak with you....it was all Mr. Dembski-Bowden's fault.

But as Matthew said, the huge Prospero posters were very effective in the 'oooooh' factor.