Battletech: A Time of War

So, as promised, here's the cover for RPG rulebook 'Battletech: A Time of War': 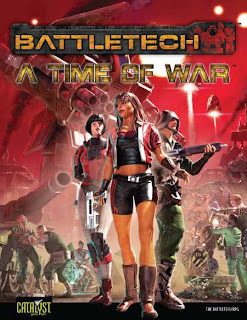 The blurb for the book describe it as...

"It is the 31st century. Mankind has spread to the stars and spawned titanic stellar empires, each controlling hundreds of worlds across a thousand light years and beyond. Yet the sins of man have followed him from the cradle of humanity.

What empire will you swear allegiance to: a warrior merchant of House Steiner; the honorbound samurai of House Kurita; the vat-bred warriors of the Clans; a mercenary that fights only for the highest bidder?

Choose your life in the universe: a MechWarrior piloting the thirty-foot-tall BattleMechs that turn the tide of any battle; a spy deep behind enemy lines discovering critical secrets; a merchant carrying critical supplies; a scientist unleashing the latest cutting edge technologies?

How will you become a legend?"

So, as always it always starts with a thumbnail.

As this was for an RPG rulebook, there was a lot of ground to cover as it had to have all the major houses visible and they all had to be doing something specific to their clan. So getting all the elements in shot and working together was the first hurdle.

The first sketch was deemed too 'head on' and lacked any drama so it was quickly revised to a worm's eye view for more 'oomph' - I also tilted the main characters head to the side as if she were in mid-chat with the pilot behind her - it gave the scene a more natural rhythm. 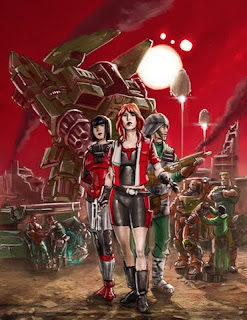 (Above)
The initial thumbnail 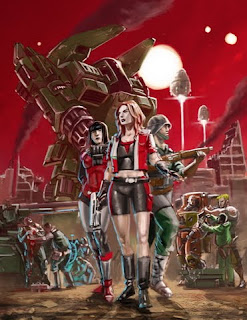 (Above)
Worm's eye view - although, technically, I don't think worms have eyes?
The star placement was changed so it was more astronomically correct.
This stuff doesn't happen by accident!
The first stage was the block in. I posed up my generic characters and got the layout as per the sketch. The Mech and distant shuttlecraft were also placed to give it all context. 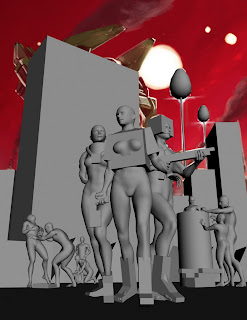 (Above)
Using simple blocks of geometry that will get ZBrushed at a later stage.
I modelled the mech, background and shuttlecraft. The main characters were refined and sculpted and lit accordingly. I went for a strong key light to simulate the harsh light of a distant sun. The rim lights I'd paint in later. 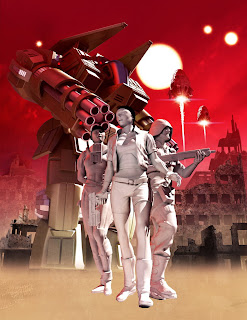 (Above)
Everything in place, I'll model the BG elements next.
The background elements were modelled and everything was textured using rudimentary textures and UV maps. The alternative materials and shadows were rendered and it was all taken into Photoshop for the final composite and paintover. 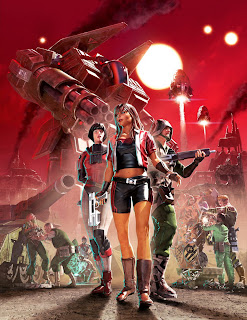 (Above)
Final image.
The BG elements were great fun to work on - each section had it's own story.
The final image looks pretty good, It's always a pleasure working on illustrations with women in it - it makes a nice change from the usual. Also, I'm trying to be bolder with my colour choices, whilst still keeping a good sense of layout. You might have seen it in my 2000AD covers recently.

The downloadable BETA for the rulebook is available for purchase here.
Posted by Neil Roberts at 16:05

Email ThisBlogThis!Share to TwitterShare to FacebookShare to Pinterest
Labels: A Time of War, BattleTech

You're like the terminator of book covers ... you just will not stop.

Thanks for sharing, I love seeing how you put this stuff together.

Out of curiosity... what is going on in the lower left there? Is he attacking that guy? Tattooing him? Fixing armor? I was hoping that the thumbnail version would help, but I still have no idea!!!