I shall be visiting the Big Smoke (London) this weekend to sign copies of the new Horus Heresy book 'Nemesis', alongside author extraordinaire, James Swallow: 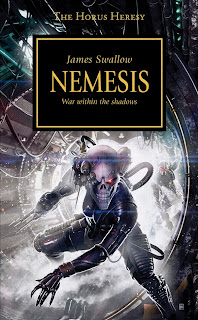 "After the horrors of Istvaan V, Horus declares outright war against the Imperium. In the shadows of the Emperor's Palace, powerful figures convene.Their plan is to send a team of assassins to execute the arch-traitor Horus and end the war for the galaxy of mankind before it's even begun. But what they cannot know is that another assassin is abroad already, with his sights firmly set on killing the Emperor."

I'll be signing and sketching whilst I'm there, so it'll also be a chance to get some rare Neil Roberts pen and ink art - so, catch the "Roberts Rock 'n' Roll Roadshow" while you can.