Privateer Press: Year of the Gear

I'd always been aware of Privateer Press, I really like their big steampunk-style robots and 'chunky' design aesthetic, so I jumped at the chance to work on this piece - entitled "Year of the Gear" - a cover for their 'No Quarter' bi-monthly magazine.

The idea was to have Cygnar Major Markus 'Siege' Brisbane and Centurion Warjack defending a hill against a Cryx attack. After a few sketches, and some revisions from the Über-Kool Kris Aubin who was art directing the piece, we settled on the final design: 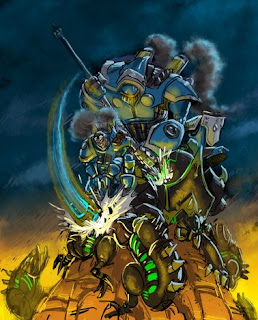 (Above) The initial thumbnail 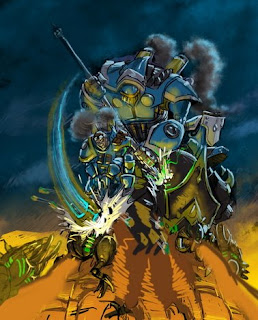 (Above) the thumbnail with Kris' alterations -
as with any good art director they always improve a picture.
From there I went on to model, light and finally render each element and their separate passes - compositing and painting it all together in Photoshop. Sounds easy, right! Well, obviously there was much, much more to it than that, but I might cover the more technical and artistic points in another post. Maybe. If anyone is interested.

Near the end of the piece Kris wanted the Cygnar Centurion Warjack to be bearing its shield, to balance the image out - so I quickly modelled, lit, rendered and composited it and it looked great! I find that's how things work being freelance, whatever wants/ needs altering, I'm always happy to oblige! So, here's the final piece in all its glory: 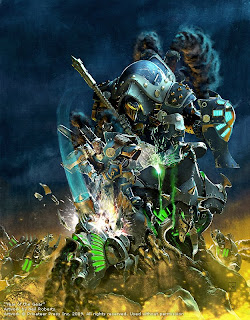 And here's the piece with the final layout and typography added: 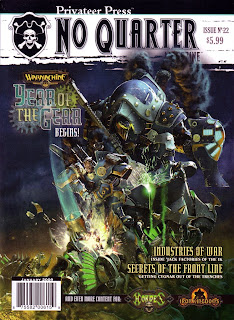 And for those still reading this post, here's a detail from the image, showing Siege in full flow: 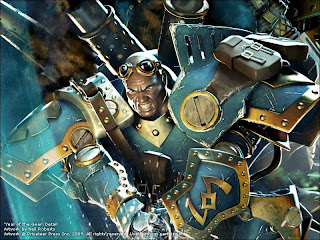 (Above) ACTION!
Ace! I love this job, making this kind of imagery is what I've always wanted to do - and now I get paid for it!

Well, that's it for now, but don't fear - I've got plenty of other things in the pipeline (logo's, 3D models, more illustrations) of which I'll be showing you as time goes by, so stick around!
Posted by Neil Roberts at 01:12

I think I told you before, but I really like this one, Neil! Keep serving up hot plates of awesome!

Hope all is well in Lincolnshire.

this must have taken you ages!
very nice work neil.