Just a quick process post about an oil painting I recently finished. I wanted to do a contemporary landscape, so I chose Regent Street, London. The aim of doing an oil painting was to re-connect with the notion of being an artist - especially after the busy year that was 2010. I wanted to re-establish those traditional skills that are easy to move away from when you've been working digitally for so long.

After a few sketches and reference photo's were taken, I launched into the painting. Below you can see my process:

(Above)
Regent Street painting in progress
As you can see I used a saturated umber as my ground, mainly because I wanted to get a real warmth to the painting, which would mainly be that rather flat Portland stone colour. Also, I painted it in elements, sky, left side, right - a kind of Alla Prima approach over several days.

The final painting (apologies for the poor quality, will get a better pic when the weather is better) 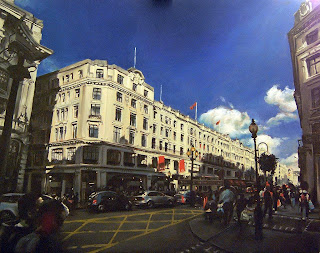 (Above)
Regent Street, 2010
Oil on canvas
24"x30"
It's exciting for me, as I've been able to acknowledge a more traditional and considered approach that will, hopefully, inform my future work. I've already gessoed a load of other canvases and panels, so I'm looking forward to exploring the posibilities of oil painting, still life and landscapes further.

I've got a few other paintings almost finished which I'll post up as and when they're done - keep those eyes peeled!
Posted by Neil Roberts at 03:44

Its great seeing the whole process too - from your original outlines to the finished piece.

I hadn't realised you did more work than just the digital stuff.

That turned out great mate!